"Féile Comórtha 1916" took place the weekend of the 22nd to the 24th of April in Kanturk, County Cork. Tim Browne, through his musical wing "The Knotted Chord Folk Club," was the organizer of said festival, and an enlightening conglomeration of song, talk and story it was.

I did a talk there myself entitled "A Captain Unafraid, The Strange Adventures Of Charlie O' Brien." There were lectures on Brehon Law, Irish rebels and revolutionaries, champions of women, and of men. There were polkas, pints, paupers, priests, punters and painters. All four provinces were represented and a mighty time was had by all. Speakers over the weekend were Dr. Patricia Ó Siodacháin, Jack Lane, Brendan Clifford, Fr Seán Tucker, Carlito Obregón (myself) and Dr. Margaret Ward. To begin sunday's proceedings, at 11am there was a screening of the feature film "River Runner" by Declan O' Mahony. River Runner tells "the true story of the wild atlantic salmon on the river Lee."  A very important, and le cúnamh dé, influential film.

Music concerts included, Jackie Daly and Matt Cranitch, Denis Brooks, Barry Lynch, Rheidun Schlesinger and Paul De Grae and many others. To top it off there was a gala concert in which we all participated on saturday night. It was a great teacht le chéile everyone bouncing off each other, exchanging those much maligned currencies of ideas, music, stories, songs, and history. Ar scáth a céile a mhaireann na daoine. Fair play to Tim for organising such a varied and interesting bunch of participants. A mighty tribute to the men and women of 1916. The talks (and some of the gigs) took place, fittingly, in the Trade Union's Hall on Strand Street Kanturk. The gala concert took place in the Glen theatre, Banteer. 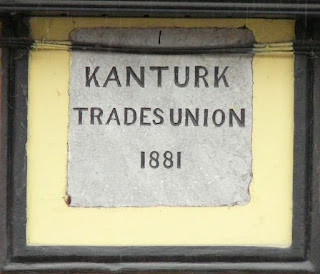 Posted by Charlie O' Brien at 8:03 AM No comments:

At first it looked like the river was going to evade us, we snaked back and forth along the coast, retracing our steps once or twice. Finally we found a path that might allow us catch a glimpse of where the river met the sea, where, in late December 1896, Captain John O' Brien was to land another large cargo of munitions and soldiers to Cuba. San Juan doesn’t loom large in the history of Cuba, but given that the only naval battle of the Cuban War of Independence took place off its shore, and “Dynamite” Johnny was the main protagonist of said engagement, we were determined to visit the small costal hamlet during A Captain Unafraid's Cuban expedition. It was the middle of the day in the end of June, and any that stirred were soon deterred and retreated again inside or to a suitable shade. We followed a winding dirt path that came to a barrier, by the road's side was a guardhouse manned by a lethargic local. The guard was looking at us slightly oddly, or maybe like us, he was drained from the heat. We explained our reason for wanting to continue down the dirt road-that we were from Ireland and were making a documentary about "The Necessary War." This seems to put him at ease and he opened the gate and we drove ahead down the long road. As we approached a little beach the path became too narrow for the car, so we continued on foot. After a mile or two trundling down a Cuban bothairín we came to a forested area, at this point, we were hacking through overgrowth, hoping at any moment to see a flash of blue peaking through the green.

Our efforts were not in vain, we finally arrived at where the river met the sea. Though it was bounded by cliffs, we walked along their edge until we came down to the shore again. It was in this narrow channel in 1896 that a Spanish gunboat lay patiently in waiting-hoping to catch Dynamite John in his act of "high treason." The libel suit against Johnny and his band of Cuban rebels (filed by the U.S. government) stated....
“that the said steam vessel Three Friends to wit, December 14, 1896, within the southern District of Florida, at the port of Fernadina, was then are there by certain persons to wit John O’ Brien, W.t. Lewis and others heavily laden with rifles, cartridges, machetes, dynamite, and other munitions of war.” “and that said vessel was furnished fitted out, and armed to be employed in the commission of piratical aggression on the high seas on the subjects, citizens and property of the King of Spain.”


The music above (by myself and sound-man Billy Kemp) is from an illustrated sequence of "A Captain Unafraid." That animation (and the music accompanying it) tells the story of "The Battle of San Juan." The script begins...


“The Three Friends” arrives to within a mile and a half of the river mouth. The vessel then dashes full speed into the black shadows cast by the blue peaks of the Trinidad Mountains.


Our destination was the San Juan River, east of Cienfuegos. We had waited 12 miles out to sea, once it was dark; we steamed at full speed for the river. There was a narrow channel running out from its mouth with dangerous shoals on both sides of it for ten miles, which made it a difficult place to get into, and a much more difficult one to get away from in a hurry.....