Having been travelling back and forth to Spain and Cuba these last few years I've been struck by the great similarities between some Spanish and Irish words. There are of course Latin roots to many Irish words,  but what is more interesting, is the relation between Irish and the original Celtic languages of Spain which are now extinct. Irish, though more than "two thousand years a growing," is perhaps (if the indigenous histories of Ireland are to be believed) the only extant Celtic language of Spain still in existence, let me explain!


According to Gaelic chronicles, most notably, Lebor Gábhala Érenn (from the late 11th century) the Irish people are of Spanish origin. If you were of Gaelic royal blood you had to trace yourself to the north of Spain. All clans of note would begin their genealogies with the Gaelic conquest of Ireland, that being, with the sons of Míl Espáine, and their leader Íth. As Gaelic chieftain Hugh O' Donnell said (affirming his allegiance to Spain in a letter from 1593 to King Philip of Spain) "quod mea prosapea [sic] ex cantabrea [sic] originem sumpsit." "Because I myself am of Cantabrian origin." As proof of this when O' Donnell eventually fled to Spain he brought with him a copy of Lebor Gábhala Érenn, and along with that, a history of the genealogy of his clan to the Spanish court.

Many modern scholars hold these origin histories of the Irish in doubt and prefer to think of them as legends. What is interesting, is that recent genetic studies of Irish have placed the Irish populations beginnings squarely in the north of Spain, giving further credence to our Spanish origins. Lebor Gábhala Érenn was patched together from many earlier works, and had its own propaganda purposes at the time it was put together, and since. It comes from a firmly christian world (with some long lost original pagan sources). It tells how Ireland was spied from a tower in Galicia in the North of Spain called Breogán's Tower. Íth, son of Míl Espáine (who's father in turn was Bile son of Breogán) was told by his father to take that green land in the distance, so beginning the Gaelic conquest of Ireland.

Because of all this, and for other more practical reasons, for many hundreds of years, any Irish seeking refuge in Spain were considered native Spanish under Spanish law. In 1680 Charles II of Spain, in a royal decree, stated that "the Irish in Spain have always enjoyed the same privileges as Spaniards, this has always been the practice and indeed still is today."

In 1791 aroused by fears brought on by the French revolution an order was issued for a  special register of foreigners in Spain. Three native Irish men living Cadiz (being aware of the old laws) complained that they should not have to register. Their case was brought before the local magistrate who communicated with the Consejo Real in Madrid who replied "the taking of the oath to which all foreigners have been directed to submit, shall not be exacted on the Irish, seeing that by the sole fact of their having settled in Spain the Irish are regarded as Spaniards and have the same rights." This was signed as a royal decree by Charles IV in March 1792. This also applied to Army lists, where Irish were listed along with Spaniards according to seniority, whereas regiments of Flanders, Italy and Switzerland were entered at the end as foreign mercenaries. In 1734 the regiment of Limerick was listed as the oldest of the native Spanish regiments, for instance. 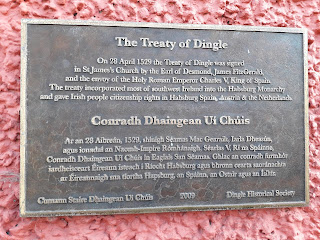 In 1529 the Earl of Desmond, James Fitzmaurice, and an envoy of the Holy Roman Emperor Charles V, King of Spain signed the Treaty of Dingle which incorporated much of the south-west of Ireland into a territory of the Hapsburg monarchy and confirmed again Irish peoples citizenship rights in Spain. Of course, this was highly effective propaganda for Spain against the English crown, that is, having a fresh stock of loyal catholics who were of the one blood with Spaniards ready to fight and die for their cause!

For me, one of the more chilling moments in Irish history was when what remained of the Gaelic nobility in the north of Ireland (in the personage of Hugh O' Neill, aforementioned Hugh O' Donnell and their retinues) sailed for the north of Spain in 1607 never to return, beginning what was called "The Flight of the Earls." Was this the Gaelic kings returning to their old origins?

Another great example of Spanish/Irish from this time is Philibín ó Súilleabháin Beara-child of an Irish nobleman who, along with his family, left Ireland for Spain in 1602, never to return. Philibín became a scholar, and was commissioned by the Spanish government to write "A Natural History of Ireland"-a reply to some very influential propaganda written by Geraldius Cambrensis called Topographia Hibernica. Geraldius's tome was written to King Henry II of England, and was used as an effective carte blanche for the original invasion and syphoning off of Ireland to English control, the book was dusted off again in Elizabethan times to justify their reconquest of Ireland. Unfortunately Philibín's important writings were lost to history until recent times, when they were found in manuscripts in the University of Upsala in Sweden. Another O' Sullivan published the first volume of the translation (from the original Latin to English) in 2009.

My own 21st century scribbling are being done, fittingly, in the town of Paterna in the province of Valencia, Spain. La leyenda persiste!


I'll finish with a bunch of Spanish words, with their Irish equivalents after...

Cómo estás tu? Conas atá tu?
How are you?

Cofre/Cofra
Chest (as in a chest of drawers)

Cala/Caladh
A cove or small bay

Fosa/Fossa**
A grave pit or ditch

Fiesta (Feasta in Valenciano)/Feasta
Party with food and drink

Na(Valenciano)/Na
The in plural form as in "the Germans"

Corbata/Carbhat
Tie (as in a neck-tie)

* I came across this word in Irish in the poetry of 18th century Irish poet Eoghan Rua Ó' Súilleabháin (in the third verse of the linked poem). Eoin came from Gníomh go Léith another village next to Killarney.

** There is a village next to my hometown of Killarney called Fossa. I was always told that the meaning of the village had been lost or that it had a pre-Celtic origin, methinks it is surely Celtic!

The Military Order of St. Patrick by Micheline Walsh, Seanchas Ardmhacha: Journal of the Armagh Diocesan Historical Society Vol. 9, No. 2 (1979)

Posted by Charlie O' Brien at 3:01 PM No comments: