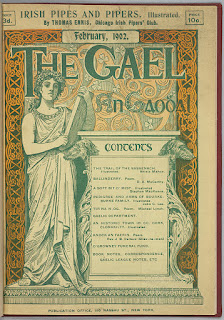 The influence of the Irish language on American English is, to me, a really interesting subject. Problematically, the actual scale of its influence is contentious and almost impossible to be definitive about. It is an esoteric subject, as the people who would have forged the majority of this influence -- that is,  the Irish of the 19th century -- were mainly poor, marginalised, and illiterate. In my own opinion they played more of a part in the forming of American English than people are often willing to realise.
One of the main arguments against the Irish Gaelic influence on American English is that there was a large number of monolingual English speakers or bilingual speakers amongst immigrants from Ireland in the 19th century, and thus linguistically they would have assimilated very quickly. The truth of this is hard to surmise, but if we say for argument's sake that this is true, it might allow for even more of a dialogue between the language communities. If a proportion of the Irish immigrants spoke English, that is, we had a foot in the door to carve out our linguistic influence on American English, so to speak. To add a little more to this theory, the English spoken by many Irish people in the 19th century was more of a Creole, for want of a better word, taking much of its color and vitality from Irish and mixing it with English. My own grandparents for instance, who hadn't a word of Irish, used innumerous words and sayings borrowed from Irish in their English. And that is a more recent generation again. Current English in Ireland isn't a patch on the exuberance and color of my grandparents' version of the language.
Irish Gaelic’s lack of standing within the American College system (the current Irish language department in Notre Dame being a notable exception) might also be said to have had an influence on it being over looked in the search for the etymology of many an American English word. Through the centuries a myriad of Greek, Roman, and English experts have graced Harvard and Yale - yet hardly a professor or scholar of Gaelic between them.
So Irish Gaelic has flourished and languished on the perimeter of American society, with the greater culture (as in bigger - bigger not always being best!) oblivious to its vagaries. Spoken most often by the illiterate, devoid of its voice in the pages of history, Irish Gaelic in America is historically found among the working class and the socially marginalized, though it has always been present in some form or another in the U.S.A.'s rich linguistic tapestry.
Today, at its lowest ebb, 20 000 people speak Irish Gaelic as their home language in the States. Sadly, though a tiny number, it is more than most Native American languages. This figure is indeed small when compared with the great slews (from the Irish for crowd - slua) of Irish speakers who came during, and in, the decades after the Great Famine. I have heard it said that there were more Irish speakers in New York in the 1870's than in the whole of the Irish Province of Munster.
It is estimated that there are currently around 20 000 native Irish speakers in the whole of Ireland, so the 20 000 that speak Irish at home in America (presumably native speakers) are no paltry number. The first Gaelic revival started in America decades before its counterpart in Ireland. The first Irish language newspaper "An Gaodhal" was published in New York in 1881.
The Irish speakers who influenced American English straddled two, if not more, worlds. They lived in some of the most culturally seminal areas of America: The Five Points of New York, the Irish Channel and Third Ward of New Orleans, and downtown San Francisco, Savannah and Chicago. They lived alongside African-Americans, Germans and many others, swimming in--rather than stirring--the great melting pot. Their malleable nature (probably due more to expediency than choice) put them right in the vanguard of the great shifting tides of America's cultural revolutions. Irish Gaelic's influence echoes in the most unlikely of places. The fact that it often relies on common sense to figure out (and--at worse--conjecture to guess) an American English word's Irish derivation, doesn't endear Irish to the academic. This counts Irish out of all but the most paltry/obvious etymological influence, according to most academics of American English.
I've assembled a rag bag mix of words and expressions in American English that for my two cents are of Irish Gaelic etymology. I'll list the ones I'm most sure of first and become more speculative as I go on!


Boogaloo - From the Irish Bogadh go luath, which probably best translates as "scarper" or "move on out." It's pronounced BUG ga go LOO.

I have a CD at home which contains songs and a couple of old, Irish-language folk tales concerning Na Fianna, warriors of huge standing in Irish folklore. In one particular tale the main character Fionn is on a hill in the Dingle Peninsula in Kerry, and he sees a boat coming into the pier. The storyteller says Fionn gets a feeling he should "bogadh go luath" or boogaloo down to the pier to the boat that is docking to see whats going on, a far cry from the Ports of Savannah and New Orleans when the famine Irish bustled and boogalooed on those city streets.

Bunny (rabbit that is), Buns (ass) - From the Irish Bun, which means bottom, not unsurprisingly! (Pronounced the same as in English.)

Boogie - From the Irish Bogadh (pronounced - BUG ah) which means to move or shift.

Jass is the original spelling of Jazz. Jazz as an American English term, originally it was slang for  something being hot, sexually that is. It broadened the scope of its meaning pretty quickly to encompass anything with that verve - fighting, music, sport, etc.  Consider the amount of Irish people in New Orleans when Jazz was gestating. One might note too that one profession open to many Irish women after the famine was prostitution. Again these people are undocumented, almost all illiterate. Here's a link to a more detailed argument/etymology from Dan Cassidy - the writer of the book "How the Irish Invented Slang" - http://www.edu-cyberpg.com/Linguistics/irish.html
Though Dan may be way off in a fair few of his theories, some of his research is genuinely enlightening, it just takes a bit of sifting through his wilder notions. Neither is Cassidy an Irish speaker, which doesn't help his argument, but he has done some interesting research, most notably as regards the aforementioned Jazz!


You Dig? I dig - From the Irish An dtigeann tú? Tigim (pronounced - on DIH-gunn too? DIG um). It means, "Do you understand? I understand."

Kybosh - From the Irish Caip an bháis (pronounced - COP ahn VAH-sh). Which means to put a definitive end to.

For those that don't know, "Skidamarinka" is a song based on a children's rhyme from a 1910 Broadway musical called "The Echo." It's been used in a lot of children's T.V. since that time, most popularly in The Elephant Show.

So Long - From the Irish Slán (pronounced - slawn) which means goodbye.

Most often used in the phrase Rí Rá agus Ruaile Buaile, used for when a party is going full throttle.  Popularised in The song "Wooly Booly" by Sam and the Pharaohs, and most recently by the band Smithereeens! (Smidiriní-Irish for little bits). I'm not sure about the wooly booly being Irish, as the writer of the song thought he was making up gibberish, but that doesn't discount it totally.

Bugged out - In the adventures of Huckleberry Finn, "Jim's eyes bugged out." He was amazed--taken aback, in other words. In a short story by Gaelic writer Liam O' Flatharta, a character's eyes are "ag bogadh amach," (pronounced - egg BUG ah MOCK) which means literally to bulge or move out, it has the same actual connotations as in English--being amazed, that is.

I'm working on a radio documentary at the moment on Johnny "Dynamite" O' Brien : a larger than life figure who battled for the Cubans in one of their warrings with the Spanish (http://www.irishargentine.org/0711quintana1.htm).
He mainly did his fighting as a filibuster, that is, a transporter of arms. Both his parents came from County Longford, Ireland, though Johnny was born down by the docks by New York's East River. He is no relation of mine unfortunately, though I'm sure our people were one, sometime in or before the era of Brian Boru, our mutual ancestor. We're about as related as two Khan's, which is to say, not atall. That would be a lovely saying to propagate methinks - "about as related as two Khan's" - Genghis being a virile old fella, maybe it will catch on.
Well, as regards the documentary, I'm soon to interview Johnny Dynamite's great granddaughter. She and her family live out in Little Rock, Arkansas, in the USA. I'm currently ensconced in Atlanta, Georgia-- Little Rock is about an hour an a half's plane ride from here.
I have written a song about Johnny which will form a motif of sorts for the documentary.

Over there by the East river,
Where the seagulls cry and stretch their wings,
The shipyard boats are primed for leaving,
It’s a long time since Jonny went a fighting.
In the month of April, 1837,
Johnny's mother exhausted, sighed,
Held in her arms her new-born baby -
Johnny Dynamite O’Brien.
As a restless child he prowled the docks,
Seeking trouble or fortune, whichever he could find,
Soon learned his trade on Cherry Street,
On ships Jane and Albion then his trade he plied.
Marine Mambí Johnny Dynamite!

On the first days of a long summer,
He first fought for Cuba and there Spain's demise.
On the Rambler he went roving,
from New York Harbor he did incite -
To Boca del Toro and waiting soldiers
Bound for Cuba's foreign climes.
Laden down with mighty explosives -
Pining for Havana’s harbor Cuba's pride.
As the rebels they went sailing,
A stormy gale did arise.
A mighty storm lashed the hold,
And the 60 tonnes of dynamite.

He smuggled all guns fired at Las Tunas,
The prickly thorn in Valeriano Wayler’s side.
Brought Jose Martí’s son to that battle
And 3000 pounds of dynamite.
He settled down in the port Havana,
As the cries of Cuba libre did subside,
Swimming in the sparkling Caribbean sea,
Basking in freedom’s glory and sunny climes.
Before Johnny died he returned to the docks,
To see snowfall on New York Harbour's side.
No-more will Johnny go a roving,
He died that June as the scorching summer arrived.
Marine Mambí Johnny Dynamite!

Some notes -
Mambí was the slang for Cuban insurgents in their 19th century wars of independence against Spain.
Valeriano Wayler was Spain's Cuban Governor, his nickname was "The Butcher". Valeriano was also "credited" with the invention the military strategy -- hamleting -- moving people out of their villages into roadside camps, where they could be policed and controlled.
José Martí was a multifaceted Cuban hero, both a poet and a journalist, a professor and a fighter. He played an integral part (both intellectually and physically) in the Cuban wars of independence. He died fighting the Spanish at the "battle of Dos Ríos".
Poco a poco means little by little in Spanish.

Posted by Charlie O' Brien at 1:58 PM No comments: