From Mexico to the MacGillycuddy Reeks

Last weekend, I organized a series of gigs for the traditional Mexican band-Tacumba son Jaracho. The band came over to Ireland from Vera Cruz, Mexico, and were playing a series of gigs up in Galway for the "San Patricio Commemoration" up in Clifden. They played three Jarana guitars, all three sang, and Alfonzo the man on the left below, danced a style of dance quite similar to our own sean nós dancing tradition.  Alfonzo bought some clogs up in Galway for flaking the floor before coming down to Kerry! Their first gig down south was (appropriately!) in a Mexican restaurant in Killarney town-Casita Mexicana. Their next port of call was Courtney's Bar-a hop, skip, and a jump, down the lane from the restaurant.
I had a late gig myself in the Pay As You Please restaurant, so, I had to leave for that half way through the concert in Courtney's. In the end we all reunited for an almighty session, in the Pay as You Please, which lasted until the early morning. 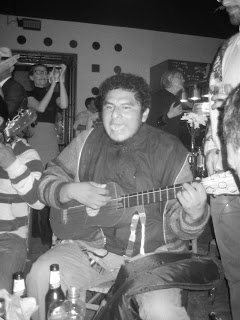 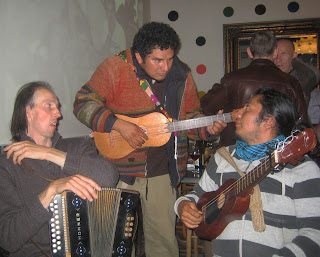 The next day took the band to Killorglan, and the Sol y Sombra, which has been lovingly converted from a protestant church to a bar, restaurant, and music venue. The series of gigs was a great success, and I, for one, enjoyed them thoroughly.
Posted by Charlie O' Brien at 4:10 PM No comments:

St Mary's well in Killarney is (as far as I can decipher) the oldest man made structure in Killarney town. The obligatory sign which accompanies the landmark states- 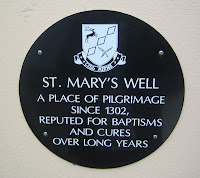 The well itself, has seen better days. Today it is entombed in a dark nest of concrete-ensconced on all sides by that hardy old substance.  On one side of the well is the Plaza hotel-a giant travesty of a thing, on the other, the Town Hall-a much more benign edifice. When I walk by the well, I like to imagine what it was like in the early days of human settlement here in Killarney. The whole country was once covered in oak forest, and Killarney National Park still boasts the last old growth forest of same. When I imagine the well in those days, I imagine forest on all sides, and  a little sylvan path leading up to the church which gave our town its name, that being-Cill Áirne.
Cill Áirne - The church of the sloes, or perhaps, the Church of Áirne-Áirne being a saint of antiquity. The church itself, is about 30 metres uphill from the well, it is also called St. Mary's. St. Mary's has been a protestant church for centuries; on the church's site was the original town church from before English settlement. I also like to imagine all the baptisms that took place over the centuries at that well.  I often wonder when the last one occurred. Maybe if I have a child myself, I'll resurrect that old venerable tradition, presuming, the lady in question will be in concurrence with my notions! 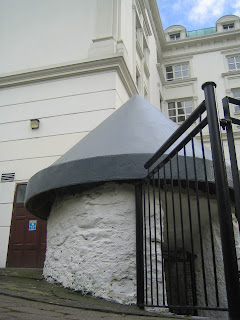 One of the more bizarre stories associated with St Mary's Church's is the tragic suicide of the church's architect. The story goes that he hung himself from the top of the church because of a mistake he made in his measurements. The three arches in the middle of the church are more like 2 and three quarter arches. If the architects during the celtic tiger years had the same morals, we'd be having funerals galore- mourning them en masse. 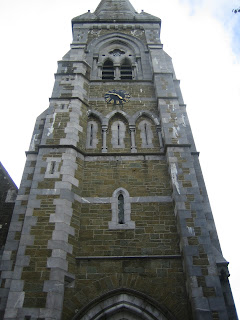 Posted by Charlie O' Brien at 1:45 PM No comments: