In Pursuit Of The Fenians 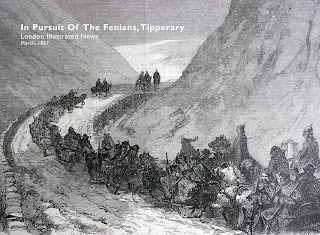 The various images in this blogpost accompany articles from 1867 that appear in "The London Illustrated News." The subject of the drawings and articles is the Fenian Rising of the same year. The drawings are from a collection of newspapers I have from the time. One particular article there in, concerns the rising in Kerry. That piece, from March 2nd 1867, is a great example of the propaganda the Fenians had to contend with. Here is an excerpt-

"The presence of a whole division of British Troops, under Sir Alfred Horsford, seems not only to have checked the advance of the Irish American marauders, who are now reckoned at no more than 50 or 100 men, but to even to have scared them out of existence; for none can be found by the most assiduous beating of Toomies Wood and all the neighbouring coverts on the shores of the lakes of Killarney. We are reminded of the legend of The O' Donoghue, not the hon, M.P. for Tralee, but his reputed ancestor the romantic chieftain of those lakes, who exchanged his ancient castle of Ross Island for kind of fresh water merman's palace at the bottom of Lough Leane, where nobody can approach him to dispute his sovereignty of the primeval rocks and boulders." "It is conjectured that the Fenian heroes who marched from Cahirciveen to Killarney on Tuesday, the 12th, stealing five rifles, and sword bayonets, with some ammunition from the coastguard in Kells and shooting a single mounted policeman who was passing with a message, have disappeared into the lakes or the stony bowels of the mountains, where the soldiers cannot follow them."

Notice the absence of Fenians in all the drawings. Except for the blackened, brooding mob in the Tallaght image, they are nowhere to be seen!

This is one of the images accompanying the Kerry article-

Below is the proclamation from the failed insurrection.


The Irish People of the World.

We have suffered centuries of outrage, enforced poverty, and bitter misery. Our rights and liberties have been trampled on by an alien aristocracy, who treating us as foes, usurped our lands, and drew away from our unfortunate country all material riches. The real owners of the soil were removed to make room for cattle, and driven across the ocean to seek the means of living, and the political rights denied to them at home, while our men of thought and action were condemned to loss of life and liberty. But we never lost the memory and hope of a national existence. We appealed in vain to the reason and sense of justice of the dominant powers.

Our mildest remonstrance’s were met with sneers and contempt. Our appeals to arms were always unsuccessful.

Today, having no honourable alternative left, we again appeal to force as our last resource. We accept the conditions of appeal, manfully deeming it better to die in the struggle for freedom than to continue an existence of utter serfdom.

All men are born with equal rights, and in associating to protect one another and share public burdens, justice demands that such associations should rest upon a basis which maintains equality instead of destroying it.

We therefore declare that, unable longer to endure the curse of Monarchical Government, we aim at founding a Republic based on universal suffrage, which shall secure to all the intrinsic value of their labour.

The soil of Ireland, at present in the possession of an oligarchy, belongs to us, the Irish people, and to us it must be restored.

We declare, also, in favour of absolute liberty of conscience, and complete separation of Church and State. 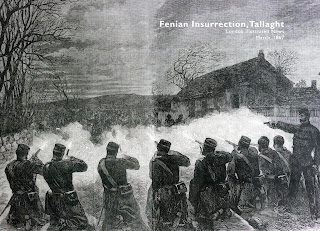 Republicans of the entire world, our cause is your cause. Our enemy is your enemy. Let your hearts be with us. As for you, workmen of England, it is not only your hearts we wish, but your arms. Remember the starvation and degradation brought to your firesides by the oppression of labour. Remember the past, look well to the future, and avenge yourselves by giving liberty to your children in the coming struggle for human liberty.

Herewith we proclaim the Irish Republic.