O love, they die in yon rich sky,
They faint on field hill or river:
Our echoes roll from soul to soul,
And grow for ever and for ever.
Blow, bugle, blow, set the wild echoes flying,
And answer, echoes, answer, dying, dying, dying. 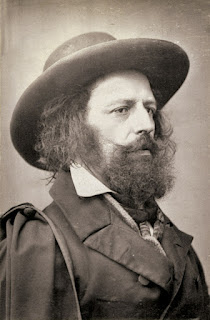 Myself and an old friend were often found drinking, and inevitably, singing around Killarney town. One night, after many drinks were imbibed, I sang out some forgotten tune. My compadre was taken by the melody, the next day he proceeded to put it to the words of Tennyson's poem "Where Splendour Falls." On our next meeting, and many since, he sang this song "Where Splendour Falls." He told me he got the melody from me, but it is unlike any melody I ever sang... I've been singing it myself ever since!

The poem was written while Tennyson was on a visit to Killarney, Ireland. I think it forms part of an opera called "The Princess." I heard an absolutely beautiful choral version of the song one time, it was, needless to say, a very different beast to my own version.

You can buy a digital download of my album "Where Splendour Falls" here.
Posted by Charlie O' Brien at 10:30 AM