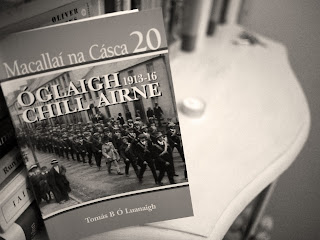 There was a book launch this evening in Gaelscoil Faithleann-an Irish speaking primary school in Killarney. The book "Óglaigh Chill Airne" by Tomás B O' Luanaigh concerns the setup of the Kerry branch of the Irish Volunteers, their involvement in the 1916 rising, and the subsequent interment of some of their members in the prison camp of Frongoch in Wales. Cheannaigh mé cóip, táimse ag tnú go mór leis an leabhair a léamh!

Just glancing through the book many gems appear, such as this short poem written by one of the internees at Frongoch, he recalls his participation in the rising in Dublin-


A thought immediately after surrender in Moore St.


Doomed to strive for all things
to achieve none,
All attacking, nothing gaining,
Battles without fruit,
Laurels without triumph,
Fame without success.

The book also tells how An Seabhac (the hawk) Pádraig Ó Siochfhradha on friday the 28th of November 1913 gave an Irish class as he usually did for Conradh na Gaeilge in Killarney. What made this class different was the enlistment of fifty members into the Irish Volunteers during the lessons. An Dún, where the meeting occurred, was an old disused Methodist Church that, incidentally, was situated right next to the apartment where I live here on High Street! This new branch of the volunteers was only the second in the country and many members went on to fight in the 1916 rising in Dublin.

In July 1914, the Oireachtas occurred in Killarney. It was on this November in Killarney too!
During the 1914 festivities, 2500 members of the Irish Volunteers marched through the town with rifles and in full military regalia. The Royal Irish Constabulary who looked on were, needless to say, worried.