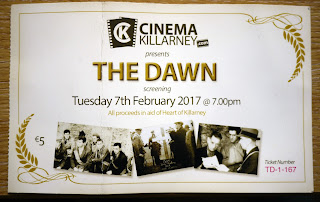 "The Dawn" (1938) was Ireland's first feature length film with sound, what were known then as "talkies." After recently being digitised, it finished a four week run in the Killarney Cineplex last tuesday week. I was there the last night of the screenings with a couple of local comrades. The film tells the story of the war of Independence and focuses on one family, the Malones, who had a name of being turncoats (blameless or otherwise) from the time of the 19th century Fenian rising.

The Dawn was set in Killarney and staffed mostly by Killarney people. It took 3 years to complete. The film was brought into existence by Thomas Cooper. Mr Cooper, besides owning the local cinema, had no background in film, yet he determined to make this movie called "The Dawn." He bought a camera for 500 pounds in London and sauntered back to Killarney to being filming. Given my own endeavor in film took 3 years to make and enlisted the help of many local and far flung aides, I was especially heartened to see a film like the Dawn being rolled out for the public almost 100 years on. Granted, the Dawn holds a special place in the history of Irish film, but with a bit of luck "A Captain Unafraid" will be also be remembered, maybe by just one or two kind souls in the far flung future! The point I'm slowly making my way around to is, we make our own luck, and that is indeed the crux of it. Both Tommy and myself endeavored and determined steadfastly to make our films and because of that made they came to be.

Ar scáth a chéile a mhaireann na daoine, film being collaborative, the enlistment and of the local community is what really made the Dawn shine. 80 years on the theatre was full each week, many enjoying the merits of the film, many other trying to spot their long lost relation's cameo appearances.
My father tells me my grandfather worked on the set of the Dawn. So, myself, I was on the look out for unusual furniturings and bits of timber gone astray! My granddad "militarized" some of trucks of the british army convoys, adding various bit and bobs to them to make them suitably intimidating. I saw bits of one of the trucks fall off at one stage. Hopefully this was planned! 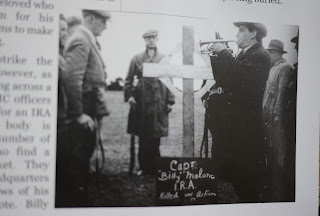 One of the scenes from the Dawn was filmed around the corner from where I grew up on Rookery Rd. The railway bridge on Countess Rd, Killarney, was the scene from "up the country" on film. Incidentally, the bridge itself is where an ambush between Free State forces and the I.R.A. occurred. That Civil War battle is commemorated with a celtic stone cross, as four I.R.A. members were killed there a short time after the events of the war of Independence portrayed on film.

Once I had a fever in my room down wind from this cross, I was drifting in and out of consciousness, sweating profusely. At one point when I closed my eyes I heard a bugler play the last stand. I was sure my time was up, that my tune had been played. Thankfully, I recovered from my fever within a few days. A couple of weeks later I was told there had been a commemoration to the fallen I.R.A. men, replete with bugler, on that feverish day in question!

The images in this blogpost were taken by Michelle Cooper Galvin, they appear in a leaflet given out at Killarney Cineplex called "The Dawn Film Trail."

The day after St. Brigid's day, a suitably rainy, dingy thursday in Listowel, the perfect time and place for the first showing of the "The Bold Brigid Cleary!" Time to take stock of the position of women in Ireland in the past, while looking forward with furrowed but resolute brows-things might not be perfect, but certainly we have progressed.

The piece, performed in St. John's Theatre/Church in Listowel, was billed as "a post-modern theatre performance based on the murder of the supposed fairy woman/witch Brigid Cleary." Brigid Cleary (born in Tipperary around 1869) was murdered by her husband in 1895. This one woman play was written, directed, and acted in by Eve O' Mahony. Though she was quick not to call it a play, to my unwashed ears and eyes, it does seem to fit that bill. At any-rate, Eve's performance was brave and bold, and her heartfelt feelings for the plight of Brigid Cleary "the last witch to burn in Ireland" rang true-fitting for the heavy boots of the unfortunate woman Eve sought to portray. There was good use made of a projector to break up the various sections of the piece, most notably when a fiery sheet of flame appears behind Brigid towards the end of the performance. Brigid's husband Michael was played by Trevor Nagle, who is heard as a detached voice raining fire and judgment on Brigid. Trevor's husky and powerful voice from the wings added to the depth and otherworldly nature of the play. Besides, the church itself is a stunning venue and also suited the heavy timbre of the piece.

By not using the term play, Eve might in part be toying with the notion of playing a part, whether that be the part she plays in the play or the part women play in society-what role they fill or have filled, now and in the past-the importance of not playing a part for the sake of it, the importance of questioning things in life, even down to the names of what are portrayed or played in the world of theatre. Everything about Brigid Cleary's story is highly charged, in it, old and new world's clash and the consequences are grave. "The Bold Brigid Cleary" brings forth a whole slew of issues-issues of inequality, tradition and superstition, progression and ignorance, group mentality and individual steadfastness, independence and interdependence.

It is important to remember there was much ignorance and superstition in Ireland, but a-lot of it came from the centuries of oppression and subsequent stagnation of the native cultures of the Island. Through events like Brigid's death we were brought screaming and roaring into the modern world. The events in the performance take place only forty years after the famine, there was a-lot of darkness in the county to emerge from. For some at the time, the murder brought into question the ability of the Irish to govern themselves, as the coroner at her death said "amongst Hottenots one would not expect to hear of such an occurrence." A by no means written in stone Home Rule seemed at this stage around the corner....A strong virtue of the play is that no easy answers or judgements are given but it leaves many questions, and the story rings true as a cautionary tale. A grand way to while away the day after Lá Fhéile Bríde, food for thought!

Posted by Charlie O' Brien at 6:59 PM No comments: