I found this note (written in Irish) in a book in a local second hand bookstore called "The Dungeon," appropriately, the shop is on the second floor! Although it is no catacomb, the Dungeon does has a slightly cavernous feel to it, and you never know what might jump out at you from the myriad of books on its shelves. The note was found in a nondescript English language book I've forgotten the name of. 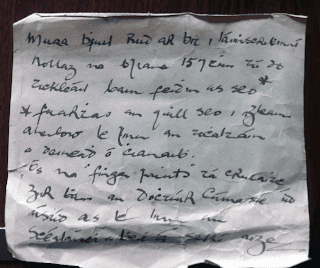 On reading the scribblings I was reminded of the novel "Cloud Atlas" by David Mitchell. As far as I'm aware Mr. Mitchell is an English author living in West Cork. Cloud Atlas abounds and binds beautifully between seemly disparate, but somehow connected stories, such as, a 19th century ship's doctor in the South Seas and a South Korean clone in the distant future. The author weaves from the infinite possibilities of cause and effect that we are often blind to. I'm sure the note I found has its own twisted web of entanglement to untangle but that is surely for someone else to unfold. A translation of the note would be....

"If you have anything in the manuscripts from December of '57 use this ticket. I got this quill in the Glen of Aherlow during the search we did a while ago. From the "fingerprints" it seems that that the Doctor Cumiskey used it for the stories he used to write."


I put the words I wasn't too sure of in Italics. The note is written in old Gaelic script, strangely the author of the note appears to use the letter z (and maybe even a very unusual x), neither of which are in the Irish Alphabet.

Zoéalzáin, crucaize and Cúmaxe. These words look like a strange mix between Catalan and Irish. Maybe its a portent from the gods that the Catalans will triumph in their referendum tomorrow. Or maybe I'm seeing things myself, drawing my own lines in the sand, weaving my own twisted web! Ar aon nós, go mbeidh an t-adh dearg oraibh amárach, muintir na Catalóine! 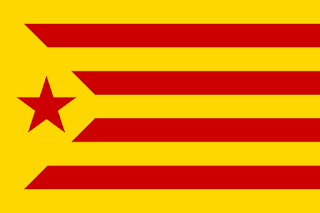 Posted by Charlie O' Brien at 9:56 AM No comments: