Heres a rough mix and outtake from "Hy Brasil, Songs of the Irish in Latin America." I've been endeavouring to finish the album in between the rays of the rollicking, rolling summer. Its been surprisingly productive just having windows here and there. Today was a particular rainy day in a summer of sun, so I spent it piecing together this song "¿Un hombre Cansado?" 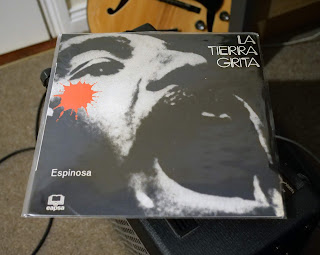 While in Valencia, Spain, a month ago, I bought an album "La Tierra Grita." The artist is Juan Antonia Espinosa-a Spaniard who spent many years living in Peru. Heres a translation of the back of the record, "these songs were born in Peruvian lands while listening attentively to the roar of the South American continent. There are three protagonists-the people (the oppressed who advance towards their liberation), the guitar (who while fighting learned to sing) and that same earth who is converted into a prophet of new country."

Being quite taken with the words of ¿Un Hombre Cansado? (A Tired Man?), I decided to record it myself. In this last phase of recording "Hy Brasil" I'm trying a few different ideas like this, some of which may or may not make the album. I'll have a few as bonus tracks though for sure. I'm playing all the various sounds on this one, the keyboard sound is called black moth dreams.

Posted by Charlie O' Brien at 9:03 PM No comments: