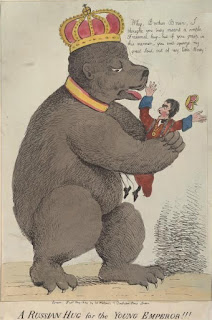 I was in St. Petersburg, Russia for nine days recently and stayed at the Soul Kitchen Hostel on the banks of the river Moyka. St. Issac's Cathedral, and the famous Hermitage Museum (where the Russian Ark was filmed) were just down the road from me. My hostel was so welcoming and thoughtful in its facilities I felt compelled to write something about it. This impetus to put thought to pen doubled when I returned to the Liberties in Dublin and stayed in "Destiny Student Apartments," a place entirely lacking in that ethereal, hard to grasp, but ultimately simple substance called soul. The gulf in thought and quality between both these resting places was as large as the three thousand kilometres from here to there.

In Destiny there were warning signs everywhere-don't fall on this, watch the step here. Everything cost money-towels €3, luggage storage €5, checking out at noon €12. If that was my destiny as a student I'd look for the nearest warning strewn exit and launch myself out the door, not in search of compensation but rather to free myself and flee to foreign shores. By contrast, in the Soul Kitchen Hostel towels were free, luggage storage was free. The beautiful little darkened storage room had disco like light features that made the room (like the rest of the hostel) feel like a haven of peace. The only signs were telling you what opportunities and facilities were available in the hostel and city. Every morning there was free breakfast in the beautiful soulful kitchen (where incidentally a scene from the series "The Master and the Margarita" was filmed). That film is based on the book by Mikhail Bulgakov which I can heartily recommend, a viciously funny and wildly imaginative yarn. In the evening on the banks of the Moyka there was free dinner for those willing to lend a hand to the chefs making it. In Destiny I was afraid to ask what or where the coffee facilitates were for fear of having to cough up more cash.


I think a-lot of this can be summed up by one thing, soul or absence of. The fob card for entry into the Soul Kitchen hostel was a heart, if you misplaced it you just made the sign of a heart by the cameras outside the hostel. Destiny's avatar, on the other hand, is the grey man above surrounded by danger and cost. Interestingly, before I left my lodgings in St. Petersburg I bought a postcard of a Russian bear holding his dear heart close to his soul. In a strange twist of fate when I arrived at Destiny Apartments there was a mural of a bear holding his two hands out to the world on the wall opposite, in sore need of a hug, some soul, or God forbid, love.

When I left the liberties behind me I was determined, if not to feed my soul, to at least feed my belly in preparation for my return to the Kingdom. I found a lovely spot "Gerry's Coffee Shop" which filled me up rightly (and verily soothed my soul too) without leaving me destitute and devoid of cash. I can highly recommend the place to anyone looking for an Irish Breakfast and a homely, no nonsense café in the heart of Dublin. For the train journey home I picked up a coffee and a copy of The Phoenix magazine, which further illuminated the darker portions, while itemising the potions employed in the Irish stew, the dark but bubbling cauldron called Dublin. My brain was swimming in said stew as we tumbled through old Erin. Between the travesty of "Swing Gate," to the Irish Times claiming the Russian's were faking political correspondences to sow division and strife in the north, I rode with a heavy heart home through our rollicking republic. It was a relief when the train rolled into the kingdom, only to find I was just in time for the annual fourth of July parade in Killarney. Another wonder to behold on this long suffering isle.
Posted by Charlie O' Brien at 8:23 PM