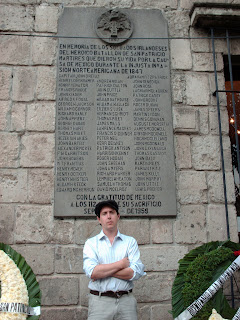 A T.V. documentary I was working on last year was just aired yesterday. The documentary was produced by Kieran Conncannon, and presented by myself. The programme concerns the life and times of John Riely-leader of the infamous San Patricio Batallion. We had a screening of the programme yesterday in the Pay as You Please Restaurant here in Killarney. There was a great turnout and we were well plied with mighty food and drink. The programme will be repeated on TG4 at 23.30 on Wednesday. You can view it on the net here for the next few weeks. The programme is to be found in the "faisnéis" section of the TG4 player, on the link provided. The title of the documentary means - the life of Riely - this is a wry take on the expression; "the life of Riely." The wry, tongue in cheek nature of the documentary's title, will quickly be gleamed from the sad but heroic nature of the story. Riely's life was far from charmed, but rich in depth and colour.

Posted by Charlie O' Brien at 3:40 PM No comments:

Play As You Please 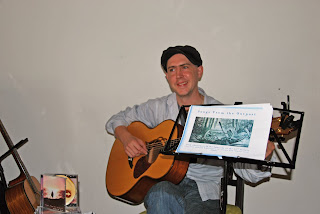 There is a restaurant in Killarney town where you "Pay as you Please." The customer decides what the meal is worth, and pays accordingly. Another quirk of the place is that it has no official name, so, people call it all manner of names: "Pay as You Please," "Bo Bo's," "Picture Hangs Too Low," and many's another name. I had a concert there yesterday along the same lines as the one in Muckross House, but with more singing and less talking.

The setlist of songs was -

The songs "At E'er As Oer," and "The Pampa's Fairest Child," were written in Argentina, by an Irishman that set up shop out there in the 1850's.  "Not Now For Songs of A Nation's Wrongs," is an Irish/Confederate American song written in the same era during the American Civil War. "My Father's Gun," is a recruitment song (with the Irish in mind) for the Union side in the Civil War. "Father George Montgomery," "Pa los del San Patricio," and "Johnny Dynamite," are all songs written by myself. Thanks to Peggy for the photo, and thanks to Rob and the lads for the gig (the restaurant is mighty by the way!).