All Among The Quality, New York

For most of August, I was roaming up and down the East Coast of the U.S. in pursuit of the bright trail of "Dynamite" Johnny's ghost. My first port of call had to be where Johnny drew his first breath-by the banks of the East River in New York. Almost as soon as he could walk, Johnny was trundling down to the Dry Dock offering his services to whoever would have him. He learned his trade lending a hand, getting up, out, and among the denizens of the old Dry Dock of Manhattan's East River. Many a time he'd be seen running headlong to the East River to work with his brother Peter who ran a sailing ferry between Greenpoint in Brooklyn and Manhattan.

In Manhattan's "Lower East Side" lies Tompkins Square-the heart of “Dynamite” Johnny’s childhood stomping ground, Johnny even raised his own family a few blocks from its leafy cover. My own first entrance into the park had some ominous omens-while resting my legs on the first bench I saw, a rat leapt out from behind my chosen place of respite. I looked to my left and on the seat beside me was an empty bullet casing. Well, all this grit and gloom, if the truth be told (even though I’ve haven’t yet lied) is from another era. Once upon a time the Lower East Side occupied the lowest rung on the social ladder; it was where it all began for immigrants, the only way was up, the only way was any damned way at all, 'cause it all started here.

Riots have occurred in Tompkins square almost every generation since it was opened back in 1834. The most recent riots kicked off for many reasons, one being, locals felt they were being driven out of their neighbourhood by rising rent and property prices. I read somewhere too, that "it was a hot summer night and the cops were young."

If you want to rest awhile in Tompkin's Square's public houses, Its got some swank joints, dives, and many's the place in between, one of our favourites spots for a drink and a feed was "Miss Lily's Jamaican Restaurant." Gentrified, possibly, Dynamite, for sure!
Since the 60’s the neighbourhood has been predominantly Puerto Rican. Billy ("A Captain Unafraid's" sound-man) and myself, almost started a scuffle "The Cape-man" of old would have been embroiled in. We were told by a local kid that the street corner we were resting our weary bones on was “A Puerto Rican Neighbourhood,” he apologised almost as soon as he’d threatened blood and blamed it all on the booze, telling us swiftly, “All men are created equal man, you have a good day, been drinking all day man.”

Father Patrick Maloney was one of the most colourful characters we met on our jaunt through Alphabet City. Father Pat has long been making sure some of the Lower East Side's turf is still green, safe, and fit for Paddies, and indeed, any other race that come under his care. Pat has been a stalwart of Tompkin's Square for many's the year, in fact, he emigrated here from Limerick, Ireland, back in the 1950’s. In the 70’s Pat became a Melkite-a Byzantine “Eastern Order” Priest, and has been an activist firmly planted in and among the community ever since. Pat is a controversial figure but is well regarded by the locals and has done some trojan work to earn that respect over the years. He is certainly not just preaching from the pulpit; he is out on the street working in his community. "Bonita's House" is the homeless shelter Father Pat opened in 1961 and has been running since. Besides his day to day work in the Parish, the dedicated and singleminded priest has been involved, or associated with: IRA gun runners and gun runnings, Black Panthers, quelling the Tompkins Square Riots, and the odd appearance at the pulpit of St. Patrick's Cathedral where he told us “they were once foolish enough to let me preach.” While out of his own stomping ground up among the quality of St. Patrick's on 5th Avenue, he paid tribute to “the only legitimate army in Ireland at the time, the I.R.A.”

In 2011 the New York Times quoted Father Pat as saying "I never broke a law, but have circumvented most of them." Dynamite Johnny once said that "Any man that can't disobey an order ain't worth shucks," and perhaps, more tellingly, "In the course of this long warfare I was several times arrested for filibustering, but never convicted; so, under our law, which presumes every man to be innocent until he is proven guilty, it must be considered that I am entirely innocent of the high crimes and misdemeanours to which I here confess for the first time; until now I never have told a word of what I have done or how I did it."
The subtitle of Johnny's ghost written autobiography "A Captain Unafraid" is "The Strange Adventures of 'Dynamite' Johnny O' Brien," and following in Johnny's wake has certainly proved strange. Father Pat has lived the past half century a stone's throw from the house where Johnny spent his boyhood days. This 2011 New York Times article written about Father Pat is entitled "A Priest Unafraid of Trouble." The title of the first chapter of Johnny's autobiography is "The Lure of Troubled Waters." The production company I put together for the purposes of filming our documentary is called "Trouble or Fortune Films." I hadn't heard of Father Pat until we landed in New York, so the unusually titled New York Times article on him, replete with allusions to gunrunning galore, came as quite a surprise to me, especially considering the tome "A Captain Unafraid" is mainly concerned with the act of filibustering, which is defined as "carrying out insurrectionist activities in a foreign country."

"I ain't afraid of any living thing" is something Johnny once declared. When asked his opinion on death, he said "I never feared that imminent deadly breach, because I always had that old fashioned belief in God." 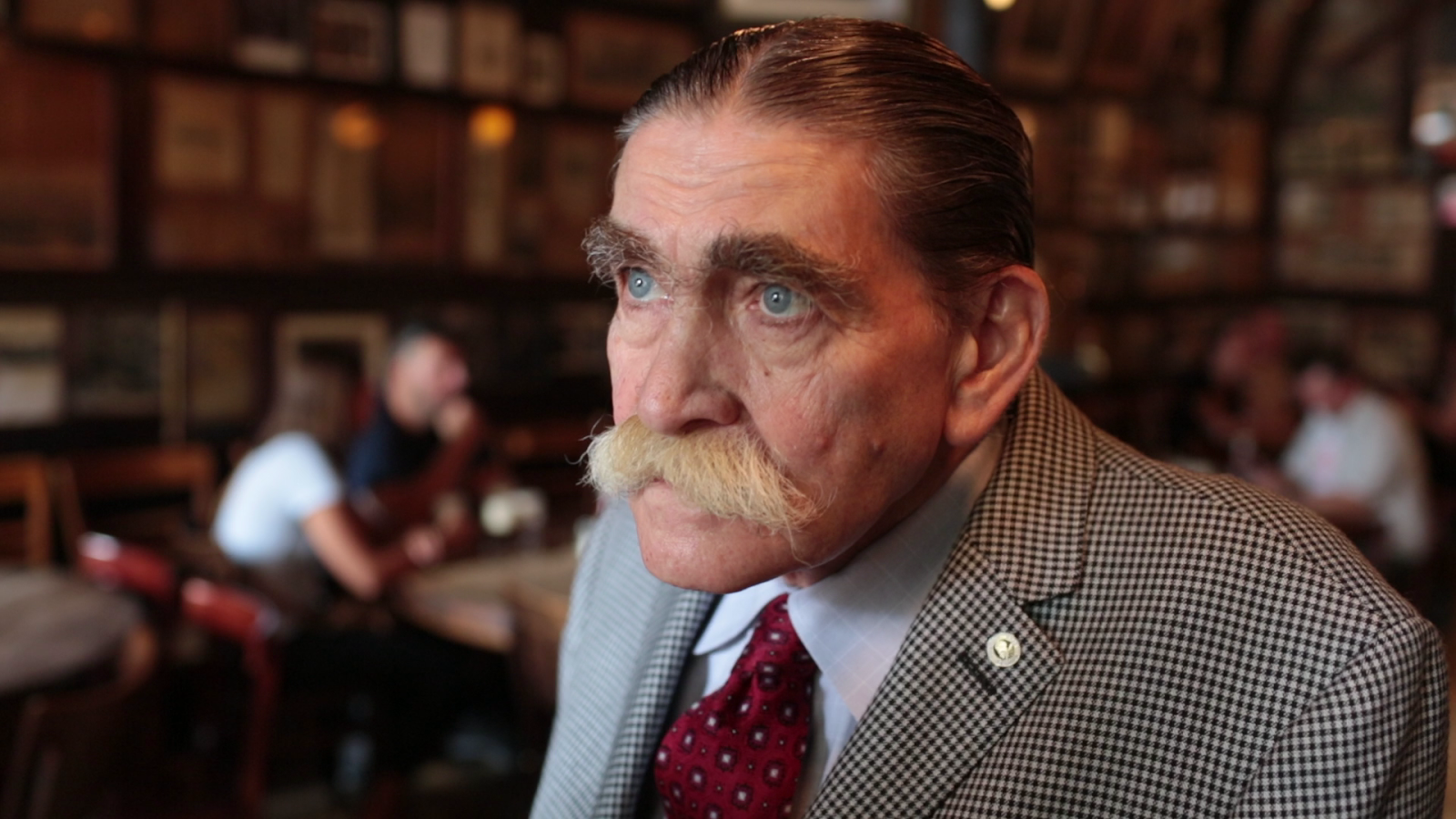 Another notable point of reference on our ghostly tour, was the spot where Johnny drew his last breath: "Hotel America." 105 East 15th Street is the address of that venerable spot, and surprisingly, the building is still extant. We visited the place where, before Johnny passed, he whispered "bury me by the sea." Johnny's great-granddaughters were with us too, they travelled to New York from Arkansas.

One of the last watering holes we wet our whistles at was The Ear Inn, where we were fed and watered hospitably and profusely. We conducted our interview with Dynamite Johnny's great-granddaughter's (Cynthia and Kristin) above the bar, in what now doubles as a living room and Psychotherapist's office. I'm sure it has served many's the salty purpose besides over the centuries.

The Ear Inn was built in 1817, back when it was "James Brown's House." It used to be so close to the sea that you'd fall into Neptune's watery embrace if you fell out the Saloon's doors. Nowadays it's about 100m from the Hudson River. Many's the ghostly apparition has wandered the Ear Inn and environs. Another strange situation that befell us concerned one of the owners, Martin Sheridan, and his nephew, Gary. The Ear Inn is situated just a short moonlight ramble from our own boarding house which was on Wooster Street. When we first stumbled upon the bar we met barkeep Gary Sheridan. Gary's family comes from County Cavan, and are a direct line back to General Sheridan of U.S. Civil War fame.

For those of you unfamiliar with rudimentary "Dynamite" genealogy, Johnny is directly related to General Sheridan, through his mother Bridget Sheridan! Johnny's parents, as Johnny states in A Captain Unafraid, "were friends and neighbours, and indeed, related to the parents of General Philip Sheridan." Gary, indeed, has the look of Johnny about him, burly, blue eyed, generous to a fault, the sort of man who'd be hard to deck in a fight, but, if you did, he'd probably get up and buy you a drink, applaud you with a roguish smile, before laying you out cold!